As a result of occupation of 20 percent of Azerbaijani territory by Armenia, the ecological environment of Sargsang water reservoir in Nagorno-Karabakh has sharply deteriorated, president of the International Eurasia Press Fund (IEPF) Umud Mirzayev said addressing the 8th World Water Forum in Brazil.

“The resources of the reservoir, which is under Armenia’s control, are used as a means of political threat. As a result, Azerbaijanis living on the front line, most of whom are refugees and IDPs, face water shortage problem and cannot fully carry out agricultural work,” he said.

Mirzayev noted that this reservoir was built to provide 96,000 hectares of territories with irrigation water.

“Therefore, taking into account this urgent humanitarian problem, the Parliamentary Assembly of the Council of Europe (PACE) adopted a resolution on January 26, 2016 on the immediate withdrawal of Armenian armed forces from the occupied territories and the non-use of water resources as a political tool. However, this resolution hasn’t been fulfilled so far,” he said.

Mirzayev also highlighted the resolution adopted by the UN General Assembly in 2010, recognizing the human right to water and sanitation.

“Everyone should have a safe and physical opportunity to get water for personal and household use. But today, ignoring international documents, norms and standards aimed at supporting peace, security and sustainable development, Armenia uses water shortage for political interests,” Mirzayev said.

He went on to add that the current situation cannot become worse than today. The international community must understand this problem and provide every person in the world with clean water, Mirzayev said.

IEPF president called on all representatives of civil society, refugees and IDPs, to join efforts and cooperate for turning water into an instrument of peace, not crisis. 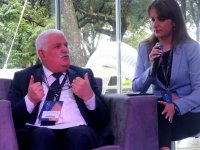 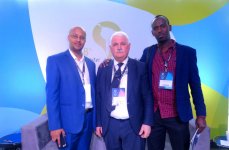