A preliminary court hearing on the criminal case of 13 more members of an armed group consisting of Armenian citizens who illegally crossed into the territory of Azerbaijan with the aim of committing terror acts, has begun at the Baku Court on Grave Crimes, Trend reports on June 22.

The lawyers filed a petition to hold all court hearings with audio and video recordings. The petition was granted.

The judges explained to the accused their rights. The accused were provided with a lawyer and an interpreter at the state's expense.

The accused can testify in the language they want, disagree with the composition of the court and refuse from lawyer’s services.

The accused also have the right to refuse from testifying.

A decision was announced that the next trial was scheduled for June 29. It will be held in the administrative building of the Baku Court of Appeal. 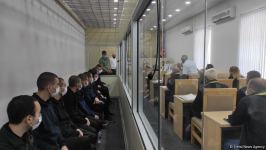