Chirac states the necessity in urgent settlement of Nagorno-Karabakh conflict At his todays meeting with Azeri president Ilham Aliyev, President of France Jacques Chirac stated the necessity in the urgent settlement of Nagorno-Karabakh conflict. Trend reports with reference to ITAR-TASS, head of France said, quoting there could be no other process but peaceful one and reminded of peace significance for Azerbaijan, Armenia and the rest of the region.

French government official said that president of France, quoting, confirmed the principles of joint statement made by three co-chairs of Russia, the US and France may 25 in Yerevan, which states that the time has come for both the parties to come to an agreement on basic principles of the conflict settlement.

Chirac and Aliyev also exchanged opinions on the situation in region, in particular conflict around Iran, French official said, reminding journalists that nowadays Azerbaijan is chairing in Islamic Conference Organization. 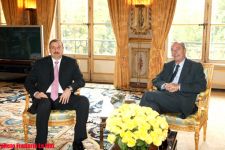