After about 90 kilometres of racing, the second group, led by Diputación de Àvila - Smilekers.com (a team run by 2008 Tour de France winner Carlos Sastre), chased down the group ahead and then reeled in the six-man break as well.

Just after the second intermediate sprint, five riders attacked, but only one managed to stay away, Zydrunas Savickas (Gediminas Gruodis) of Lithuania. He was joined by group of 8 riders on the final climb. In the difficult run-in to Ismayilli, three riders attacked out of the nine: Rubio, Reguigui and Savickas. In the last kilometre on the streets of the town Rubio managed to escape from his companions and crossed the finish line solo, 12 seconds ahead of Reguigui, who took over the lead from Aleksandr Grigoriev (RUS).

"The stage started very fast," said Rubio. "There was an early break with no Àvila-Smilekers.com rider in it, so we had to chase and it took me time to recover. I came to this race intending to do something, and I had good legs today. The stage was very long, very hard and very hot, but I got a good stage win today. From now on, I'll just take the race day by day". 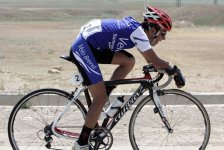