Ministry said that the resettlement process is carried out on the basis of a single regulation agreed with the relevant state authorities.

According to the rules, a farmer who has at least 200 small cattle and 40 bee families, registered in electronic agricultural information system, can apply during the season to transfer his farm to pastures in liberated territories.

"A farm owner can take up to nine assistants with him," said the ministry.

Farmers whose applications were approved prior to resettlement, received training at Azerbaijan National Agency for Mine Action (ANAMA) training center located in Azerbaijan’s Goygol region.

Ministry added that 940 sheep farms have been transferred to Kalbajar and Lachin pastures since the beginning of 2022.

According to ministry, 1,101 beekeepers moved 61,045 bee colonies to pastures in East Zangazur and Karabakh economic regions during this period. 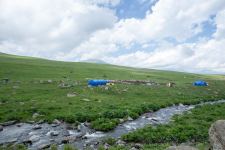