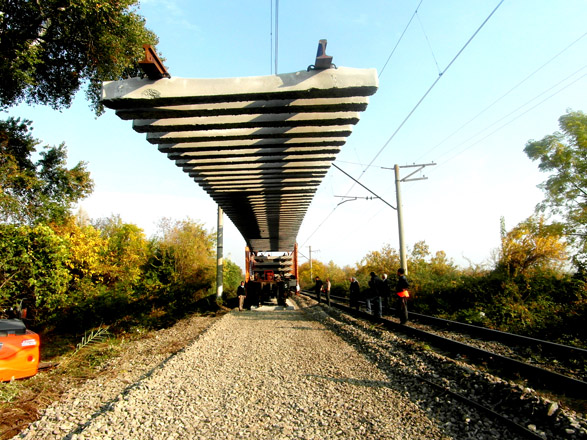 Iran will complete the construction of Qazvin-Rasht-Astara (Iran) railway in three years, Mehdi Mohtashami, head of the secretariat of Azerbaijani-Iranian intergovernmental commission on cooperation in trade, economic and humanitarian spheres said in an exclusive interview with Trend.

"As is known, the construction of the railway section from Qazvin to Rasht has already been completed," he said. "The evaluation plan of the section from Rasht to Astara has been worked out, the route has been determined, the infrastructure is ready and huge investments have been made."

Given that the heads of both countries have emphasized the importance of improving this railway, the construction work will be completed in a short time, according to Mohtashami.

Rails should be laid and construction work should be completed on the 160-kilometers long section, he added.

"Reconstruction of the Qazvin-Rasht-Astara railway is one of the priority projects of the Ministry of Roads and Urban Development of Iran," said Mohtashami.

Iran was considering several options of investment for modernization of the railway, the head of the secretariat of the intergovernmental commission said.

"An agreement between the railway administrations of Iran, Azerbaijan and Russia was signed for the joint investment in the project," he said. "Iran also independently holds talks with some countries and companies for investments and technical equipment. In particular, discussions were held with the Islamic Development Bank and ECO Bank. We hope that with the lifting of sanctions we will be able to attract investment in this project, and I'm sure in its provision with the necessary means, taking into account the priority of this railway project."

Mohtashami said that Iran plans to complete the reconstruction of this project during a period of three years, and connect Iran and Azerbaijan by the railway, which is the missing link in the transport corridor North-South [a part of the Silk Road].

"In order to join the Silk Road, infrastructure should be fully prepared," he said, adding that this project is of strategic importance for Iran. "Now, the project of the new Silk Road is also being implemented, which is being revived by China, and $100 billion has been allocated for that reason. If Azerbaijan and Iran are connected by railways, it is safe to say that both countries will take a worthy place on the Silk Road. The railway will connect the countries for international trade and transit of goods to other countries: through Iran to Azerbaijan, and from European destinations to Azerbaijan, Iran and the Gulf countries."

The Qazvin-Rasht-Astara railway with a length of 375 kilometers is currently a missing link in the transport corridor North-South, which will connect Northern Europe to South-East Asia. It will serve as a bridge to connect the railways of Iran, Azerbaijan and Russia.

According to preliminary estimates, its capacity will be 1.4 million passengers and 5-7 million metric tones of cargo a year. Around 22 tunnels and 15 bridges will be built throughout the railway. Around 15 tunnels have already been constructed.

The Qazvin-Rasht-Astara railway is part of the North-South Transport Corridor. Its aim is to integrate the main transportation lines of Azerbaijan, Iran and Russia. Investment worth $400 million is designated for the construction operations.