Other News Materials 28 December 2013 12:46
At least 26 people including two children, were killed when a passenger train coach caught fire in southern India Saturday 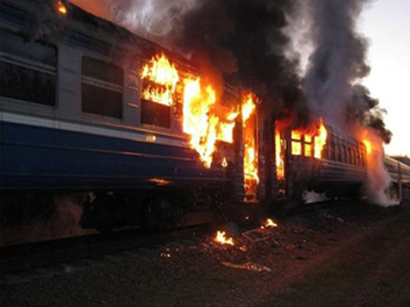 The train had departed from Bangalore late Friday and the fire broke out in an coach around 3 am, said CS Gupta, a spokesman for the railway authority, dpa reported.

"Some of the passengers were charred to death while others suffocated," he said. "We are investigating the cause of the fire, it looks like it could have been sparked by a short circuit."

There were more than 60 passengers in the coach where the fire broke out. The train was travelling at a slow speed and several passengers managed to jump off the train after breaking the glass panes of toilet windows.

"There was not even a fire extinguisher in the compartment. I did not know what to do," the Hindu newspaper quoted survivor N Natesh as saying.

"The curtains were the first to catch fire, burning faster than we could react to, spreading the fire to the blankets, etc," Natesh said.

At least 10 passengers were injured and admitted to hospital. The condition of a 5-year-old girl was critical.

The coach was detached from the train, which then resumed its journey to Nanded town of Andhra Pradesh state, Gupta said.

At least 40 people were killed when a passenger train caught fire in the state in July 2012.