Today is a very sad day. At the same time, today is a glorious days. Farid and Mubariz were killed for their land. They have shown true heroism, bravery. The President of Azerbaijan Ilham Aliyev said during the farewell ceremony for servicemen.

"In an unequal battle, Mubariz İbrahimov lost his live, killing 5 and wounding 3 enemies. Mubariz knew well that he can not leave the battle alive. But the land, love of the land, the spirit of patriotism, rose him to the level of martyrs. Mubariz is an example for all young people. Ahmedov Farid was killed while implementing his duties. After their death, both servicemen were awarded by the state," said Ilham Aliyev, AzerTAj state news agency reported.

In his speech, the President said that Farid and Mibariz were killed as heroes in the June and September battles for the territorial integrity.

"During these months, we tried to return them to home land soon. However, it was very difficult. Denying the civil rules, Armenia was refusing to return the dead bodies of our heroes. This is an unprecedented wildness.But we believed that we would return our sons and this day came. I express my condolences to martyrs' parents, their relatives. I want to express gratitude to parents of martyrs for bringing up such heroes for the Motherland. Their patriotic upbringing lifted Mubariz and Farid to the top of morals. Each loss on the frontline shakes us, every loss is hard for us. But we live in conditions of war, and with their lives and heroism, Mubariz and Farid proved to the enemy that the Azerbaijani people, Azerbaijani youth are ready to sacrifice their lives for the Motherland. This is a great example of heroism and patriotism. Once again I want to say that today is a very sad day for every Azerbaijani. During these months, all Azerbaijani people were with the families of Farid and Mubariz. Azerbaijani people showed solidarity. I know that during these months, our citizens living in various regions visited the families of our martyrs sons, have expressed their sympathy, expressed solidarity with them. A short, but glorious life of Mubariz and Farid more united the people of Azerbaijan. At the same time, today is a glorious day, as we with great honor accompany our sons to their last path. I am sure that their cherished memory will never erase from the hearts of the Azerbaijani people. In our army, there are tens of thousands of such heroes as Mubariz and Farid. They are waiting for the order of the Supreme Commander. They are always ready to liberate their homeland. Azerbaijani army is the most powerful, most professional, most efficient army in the South Caucasus, the heroism of our martyrs once again confirms this. We not only have a large quantity of weapons, ammunition, military equipment, military capabilities, our army is also enjoying greater elation, because our work is true. We have not occupied the land of another country. Our lands have been under occupation for many years. We do not claim for the lands of another state. But we will not give a span of our land to anyone. We will restore our territorial integrity. Mubariz and Farid did not die on the territory of another country, they have become martyrs in their native land.
The day will come when Azerbaijan will restore its territorial integrity. We want to resolve this issue through negotiations. We do not want our young people to become martyrs. We want them to live, study and work for the motherland, for the state. Each loss in the combat zone is hard for us. Therefore, we strive to ensure that the issue would resolved peacefully, through negotiations. The position of Azerbaijan is gradually being strengthened in the process of negotiating. Our position is supported not only by political and legal truth. Today, Azerbaijan several times outstrips Armenia in all parameters. This advantage have been created by us, the Azerbaijani people. Today our advantage both politically and economically and militarily is already evident to all. But at the same time, today, on this glorious day, I want to reiterate that we will not negotiate for talks. We will not allow Armenia to engage in imitation of negotiations. We will negotiate as long as we have hope for the restoration of territorial integrity in this way. If we see that this is impossible, then the State of Azerbaijan will restore its territorial integrity, using the military option. I have no doubt that for this we have all the opportunities - training, logistical equipment, enough weapons and ammunition, professional army, high spirit and the will of the Azerbaijani people. We are at any time able to restore our territorial integrity through military means. And the enemy must know and knows it. Azerbaijan's territorial integrity has never been and will not be the topic of negotiations. Azerbaijan will restore its territorial integrity, Nagorno-Karabakh is our home, native land. For centuries, the Azerbaijani people have lived and worked in Nagorno-Karabakh and surrounding regions. The current Armenian state was created in historical Azerbaijani lands. Erivan Khanate, Zangezur area are our historical lands. We will never allow the second Armenian state to be created in our native land - in Nagorno-Karabakh. The people of Azerbaijan will never accept this situation. Today we have all possibilities to resolve the issue. Simply, we strive to use the negotiation process. We do not want a war. Who wants a war? But we will never accept this situation. Today, we have mobilized all efforts to complete the task facing us. Today, we are able to do this, and the heroism of our martyrs once again testified it.
Dear parents of our martyrs, these months were very difficult for you. You have lost your sons. More grief can not be. But you, like real people, said that all we are prepared to die for our country. Only the Motherland would be alive! Let God rest the souls of all our martyrs! 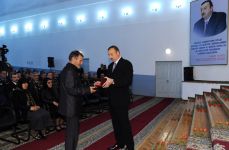