Experts: U.S. Secretary of State's visit to South Caucasus can contribute to progress in Nagorno-Karabakh settlement 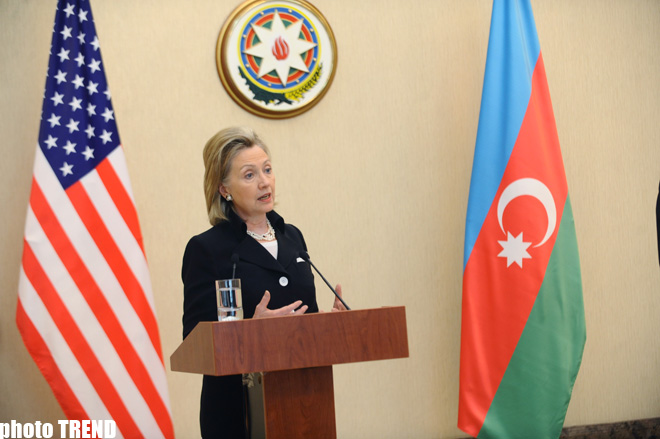 U.S. Secretary of State Hillary Clinton's visit to South Caucasus can contribute to progress in the Nagorno-Karabakh settlement, experts said.

After U.S Secretary of State Clinton's visit to Baku and Yerevan, we can expect progress in the Nagorno-Karabakh settlement, but progress depends primarily on the policies of the regional actors, especially Armenia and Azerbaijan," Hudson Institute Center for Political-Military Analysis Senior Fellow and Director, World Politics Review Senior Editor Richard Weitz, told Trend via e-mail.

The United States is committed to a peaceful solution to the Nagorno-Karabakh conflict on the basis of territorial integrity, non-use of force, the right to self-determination and on the basis of the Helsinki principles, " U.S. Secretary of State Hillary Clinton said on Sunday in Baku at the press conference following her visit to Azerbaijan.

"The U.S. can not resolve the conflict, but can help to bring the parties together," Clinton said, adding that the United States can be partners in the negotiations between the two countries.

Observers are optimistic about Hillary Clinton's visit and expect positive results from it for the region as a whole and for the settlement of the Nagorno-Karabakh conflict in particular.

Clinton's attention to the Nagorno-Karabakh conflict shows that she now understands that making progress on this is crucial for securing a Turkish-Armenian rapprochement, George Mason University Professor of Government and Politics, Department of Public and International Affairs, U.S expert on South Caucasus Mark N. Katz said.

Although not guaranteed, it is just possible that U.S involvement may help bring about an improvement in Azeri-Armenian relations, he said.

"I think that the Obama Administration prefers to work on the Nagorno-Karabakh problem than the Georgia problem.  Nagorno-Karabakh is something that the U.S. and Russia can cooperate on, whereas Georgia is not," he told Trend via e-mail.

Azerbaijani political analyst Rasim Musabeyov said that the U.S. role can increase amid the existing conflicts in the region. Russia acted more in resolving of the Nagorno-Karabakh conflict at the level of top officials than the U.S. because president Obama can not give enough attention to the conflict, as the Russian president Dmitry Medvedev.

"It is stipulated by the geographical position of Russia and that Moscow was traditionally present in the region much more than the U.S.," Musabeyov told Trend.

Clinton's visit must inspire confidence the countries of the region that Washington is ready to support the independence and development of these countries, Musabeyov said.

"However, we will see soon that neither conflict nor the region is given to Russia," he said.

While the U.S and other members of the Minsk Group need to maintain strong pressure on the Azerbaijani and Armenian leaderships to make progress including beginning to prepare their populations for concessions that will be necessary if a solution is to found, she said.

"I do not see an early settlement or even any movement on the issue," he said.

Musabeyov said that recent developments in the Nagorno-Karabakh settlement, including a statement by the presidents must pass the test of time to speak of progress.

"This conflict will not be resolved upon the Russian scenario. But on the other hand competition of powers in this matter did not help to resolve the conflict. It is necessary to wait for the practical results of Clinton's visit to the region," he said.