Armenian-Azerbaijani conflict Materials 12 July 2011 11:07
EU intends to increase its role in the Nagorno-Karabakh conflict resolution process, but this should not be done through the OSCE Minsk group, EU Managing Director for Eastern Neighborhood Miroslav Lajcak said in the interview with Radio Liberty of Armenia. 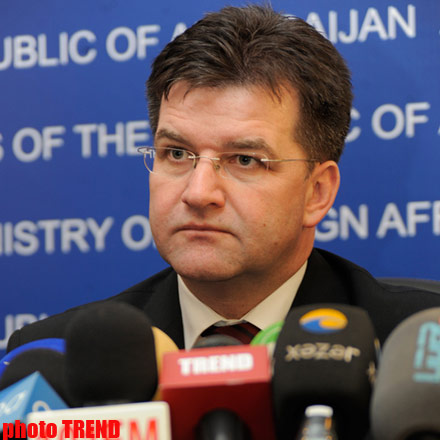 EU intends to increase its role in the Nagorno-Karabakh conflict resolution process, but this should not be done through the OSCE Minsk group, EU Managing Director for Eastern Neighborhood Miroslav Lajcak said in the interview with Radio Liberty of Armenia.

"EU supports the Minsk Group and its efforts to a find political resolution for the conflict. Meanwhile, there is an increasing belief in the EU member-countries that Brussels should also have an active and visual political role," he said.

He said the Nagorno-Karabakh conflict is the only issue in "our neighborhood where the EU is not directly involved."

"We cannot establish relations with our Eastern neighbors and pretend that the conflict does not exist," Lajcak added.

He said now the EU is negotiating with the OSCE Minsk Group on which concrete steps are to be taken, when, and how Brussels can such take the steps towards conflict settlement. "However, the answer does not depend on discussions with the Minsk Group, but on the talks," he added.

Now a political settlement is on the table that will open a new series of actions for many, including the EU, he said.

Brussels, Lajcak said, can do much. For example, bring together the parties to promote a dialogue between the societies and introduce European standards.

"However, these steps will depend on the dynamics of the negotiation process: if progress is achieved, a much larger field will be opened for the EU to participate, and if it fails to achieve progress, the European family will have fewer opportunities to do something," Lajcak said.

The European Union is evidently interested in this conflict given that the High Commissioner for Foreign Policy Catherine Ashton will soon appoint a new representative of the EU in the South Caucasus.

"The appointment will allow implementation of EU's position, interests and policy in the region," he added.