Hosted by the Chinese National Energy Administration, the conference brought together ministers of energy and representatives from relevant international organizations. The major highlight of the conference was Building the Belt and Road Energy Partnership.

Addressing the conference, Shahbazov said that through restoration of the historical Silk Road, China and Azerbaijan are bringing continents and civilizations closer to each other, building a new model of cooperation of the Belt and Road Initiative in a large geography, which covers South-East Asia, Africa and Eastern Europe.

He noted that the successful transport projects, such as Baku-Tbilisi-Kars, South-North, Alat International Sea Trade Port, implemented by Azerbaijan, have considerably contributed to the One Road, One Belt initiative.

The conference, which was hosted for the first time, featured discussions on a wide range of topics, including encouragement of investments in energy and unimpeded energy trade.

One Belt, One Road initiative was put forward by Chinese President Xi Jinping.

Azerbaijan expressed its support to the initiative when the country signed the Memorandum of Understanding on Joint Encouragement of the Establishment of Silk Way Economic Belt during President Ilham Aliyev’s state visit to China in 2015. 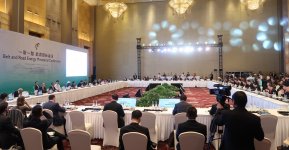