Occupied Azerbaijani town of Agdam and Hungarian town of Tiszavasvári became twinned, the Azerbaijani embassy in Hungary said on Friday.

The document was signed by Tiszavasvári mayor, Dr. Erik Fülöp and head of the Agdam executive power Nizami Sadigov.

Nizami Sadigov thanked the Hungarian counterpart for the action, spoke about Agdam, its situation before the war and now, as well as the great material and moral damage made by Armenian aggressors, large creative and restoration work which is being carried out on a part protected from the occupation.

According to the document, the Azerbaijani and Hungarian twin towns will expand the economic and cultural relations, provide mutual support in ensuring the business interests and organizing the tourist trips.

Moreover, special attention will be paid to the promotion of Azerbaijan's realities in Hungary, and in particular the unfortunate consequences of the Armenian aggression in Nagorno-Karabakh and Hungary's realities in Azerbaijan.

While speaking at the signing ceremony, Azerbaijani ambassador to Hungary Vilayat Guliyev, MPs representing the Agdam region at the Azerbaijani Parliament Agil Abbas and Bakhtiyar Aliyev, as well as Hungarian MPs, chairman of the Azerbaijan-Hungary parliamentary friendship group Marton Dendoshi and chairman of the Hungary-Turkey Friendship Group Tamas Hegedűs stressed that this event opened a new page in the relations between peoples of the two countries.

They added that this was serious moral support for Azerbaijan's just cause.

It should be stressed that a memorandum of understanding was signed between the occupied Azerbaijani city of Shusha and Hungarian city of Dendesh on May 9. 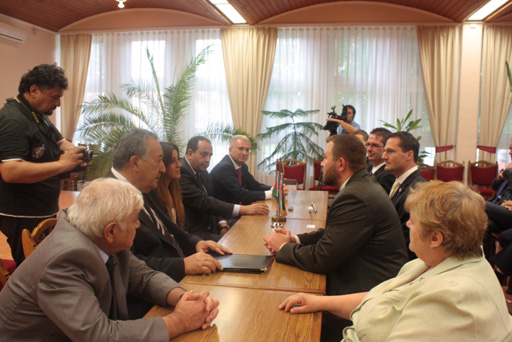