Goltz has been awarded the high title for his research on Azerbaijan and the Caspian region, well-known publications in this sphere and a great contribution to strengthening of mutual understanding between the peoples of Azerbaijan and the US.

During the award ceremony, Pashayev stressed that Goltz is his great friend, and in particular, great friend of Azerbaijan.

“Goltz is an excellent author and his works became the best among the books devoted to the early years of the formation of Azerbaijan,” Pashayev added.

“Although these books cannot be called diaries, they vividly describe the experience of the author himself and have been written in a personal manner,” the rector added. “The books by Goltz have been translated into Azerbaijani and Turkish.”

“As for Goltz’s articles, as a former ambassador to the US, I must stress that these books revealed the history of Azerbaijan for the US readers,” Pashayev added. “In one article about Khojaly, Goltz wrote that most of the people he met in Khojaly city either died or were missing."

“Goltz found many creative ways to tell the world about Azerbaijan and the Caucasus region,” the rector said. “During the most difficult period for Azerbaijan, Goltz was always near, and I really think that this award is the smallest thing we can do for you. I hope that you will keep Azerbaijan forever in your memory.”

"While talking about modern Azerbaijan, the huge infrastructural changes that have occurred in the country, beautiful modern architecture and other visible changes can be cited,” Goltz said. “But the most important thing that has changed in Azerbaijan is the education system. The development of ADA University is worth mentioning.”

“Every time I visit Azerbaijan, I deliver lectures to a new audience,” Goltz said.

Goltz is the author of the book entitled "Azerbaijan Diary", which is one of the first books on independent Azerbaijan and the Armenia-Azerbaijan Nagorno-Karabakh conflict.

The articles written by Goltz in Washington Post, National Interest and other reputable newspapers described Azerbaijan for the world community, and, in particular, revealed the truth about the Khojaly tragedy was widely covered. 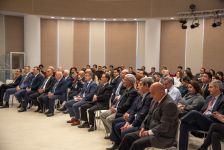