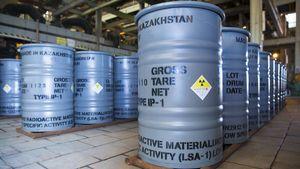 "Following the successful floatation of Yellow Cake plc, NAC Kazatomprom JSC is pleased to confirm that its long-term supply contract with Yellow Cake, which was signed on 10th May 2018, will now be implemented," the message says.

It is noted that under this agreement, Kazatomprom initially delivered just over 3,100 tons of uranium which represents more than a quarter of its production for 2018 and over 5 percent of global primary production.

The agreement is long-term in nature, contemplating the delivery of up to $100 million worth of uranium annually, at market related prices, for at least another 9 years, subject to and upon completion of subsequent follow-on offerings by Yellow Cake and certain other conditions.

“We are pleased to sign this supply agreement for a substantial proportion of our product. The listing of Yellow Cake helps meet the growing demand from investors,” the message quoted Galymzhan Pirmatov, CEO of Kazatomprom as saying.

"NAC "Kazatomprom"” JSC is a national operator in the Republic of Kazakhstan for the import and export of uranium, rare metals, and nuclear fuel for nuclear power plants.

The company was established in 1997. Samruk-Kazyna JSC is the only shareholder of the company.

Kazakhstan has been the world leader in the extraction of natural uranium since 2009.