Azerbaijan Railways CJSC is planning to commission the Laki-Gabala railway line by the end of the current year, Trend reports referring to the company.

According to the company, 82 percent of building work for the railway has been already completed.

“The line laid to Gabala originates from Laki station on Baku-Boyuk Kasik railway. The total length of the new railway together with its branches is 44.5 kilometers,” the company said, “Foreign experts were involved in the design of the new railway and construction work is being carried out by local specialists.”

“The new railway, which has been built for 2 years, has 7 bridges, 6 road tunnels, one overpass, two crossings for animals and other engineering structures,” the company also said. “Moreover, along the railway power transmission line, supporting structures were installed, one traction substation built, and the fitting of the catenary is under completion. For security purposes, metal fences with a total length of 85,000 running meters are installed along the railway.”

As the company noted, the railway will have one stop in Aghdash and one station in Gabala.

“Besides, an alarm and communication station is being built along the road. Electric trains manufactured by Swiss company Stadler will run along the line. The average speed of trains will be 100 kilometers per hour, which will allow passengers to get from Baku to Gabala in three hours in comfortable conditions and safety,” the company added.

Company noted that, construction works for the railway are planned to be completed by November 2020. 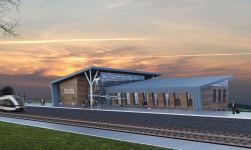