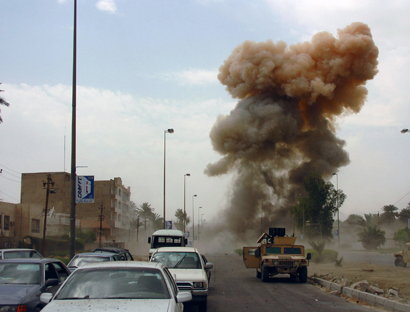 This comes amid the visit of US Under Secretary of Defence John Rood to Iraq for talks with senior officials in Baghdad and Erbil on regional security and the fight against terror, Trend reports citing Sputnik.

At least six people were killed and 15 more injured in three blasts that rocked the Iraqi capital of Baghdad, Reuters has reported, citing security and medical sources.

Three people were killed and five others wounded when a motorcycle exploded in the northern Shaab district. When another motorcycle exploded in the southwestern Bayaa district, two people were killed and six more injured, the agency says, quoting sources. A third explosion happened when an improvised explosive went off in the Baladiyat district in eastern Baghdad, killing one person and injuring four others.

The explosions took place during the visit of US Under Secretary of Defence John Rood to Baghdad and Erbil, where he is expected to hold talks with the country's senior officials to discuss the issues of regional security and measures to continue the fight on terror.