"I always believed in myself and I consider Eurovision contest a platform," she said.

Nishliu added that she was very happy to be given opportunity to represent Albania at this contest.

"I wanted to share my inner voice with everyone, and Baku Crystal Hall allowed me to do that," she said.

In the Finals, Albania will perform under #3.

Moments ago first Semi-Final of the Eurovision-2012 song contest has finished. 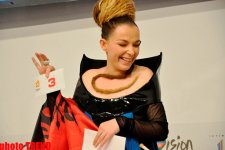