"The data we have been collecting might be quite instrumental in informing us on social dialogue and hopefully for the improvement of national legislation," Rogovsky told Trend in an interview.

Meanwhile, Rogovsky expressed hope that the document contributes also to its implementation.

"This is because the question is always that you can have the best laws in the world, but the problem is in its implementation. So that is why it is not sufficient to prepare a set of dates, it is more important to see how this data becomes a part of overall understanding, a part of consensus building between the social partners," he said.

According to Rogovsky, the document was developed jointly by the Azerbaijani Ministry of Labour and the Social Protection of the Population, social partners - trade unions and employers of Azerbaijan and international experts of ILO offices in Geneva and Moscow.

The document is rather a holistic picture of the on-going social and economic processes and labour standards existing in Azerbaijan. It covers at least 10 areas, ranging from employment to social protection, social dialog and working conditions and contains quite comprehensive statistical and legal analysis of the social situation in Azerbaijan.

The document will give an opportunity to Azerbaijan to compare itself with other countries, understand where failings exist and where certain progress was achieved and why, Rogovsky believes. Moreover, it can assist national decision makers on how to resolve problems existing in social security, social protection, employment, social dialog, working conditions and some other.

By now the document will have been published in English. Meanwhile in the near future it will be translated into Azerbaijani and available for a broader audience.

"We just discussed with our partners in the Ministry of labour that this document will be translated into Azerbaijani pretty soon," ILO representative said.

Moreover, according to the reached agreement, the profile will be updated on a regular basis to reflect the developments both in terms of legislation and those of statistical data, Rogovsky said. 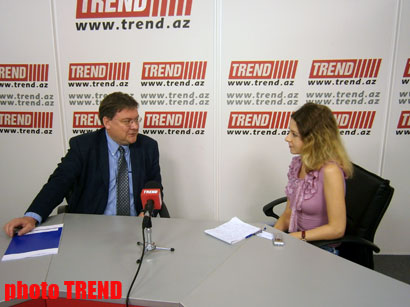