European Games Journey of the Flame route in Baku revealed

Baku 2015 : EUROGAMES Materials 3 June 2015 19:04 (UTC +04:00)
Baku 2015 revealed the route that the first European Games Journey of the Flame will take through Azerbaijan’s capital city from June 7-11, ahead of the entrance of the flame to the Olympic Stadium at the Opening Ceremony on June 12. Baku 2015 revealed the route that the first European Games Journey of the Flame will take through Azerbaijan's capital city from June 7-11, ahead of the entrance of the flame to the Olympic Stadium at the Opening Ceremony on June 12.

The Baku 2015 Flame was captured at the sacred Ateshgah temple on April 26, and since then has traveled the length and breadth of Azerbaijan, spreading the message of the European Games and involving the whole population in anticipation of the inaugural event.

On June 7, the flame will arrive in Baku in spectacular style by boat before visiting the newly redeveloped White City Bulvar, Neftchilar Avenue and Flag Square, finally arriving at the Maiden Tower, where it will stay overnight during its time in Baku.

On June 9, the Baku 2015 Flame will tour the picturesque Old City, a UNESCO World Heritage Site, taking in many of the historically significant buildings. These will include the famous Shirvanshahs' Palace, acclaimed by UNESCO as "one of the pearls of Azerbaijan's architecture."

The following day of the Journey, June 10, will celebrate Baku's parks and cultural spaces, as the flame visits Nizami Street, Fountain Square, the Winter Park, Philharmonic Park, and finally the City View Park at the top of the funicular railway.

June 11 will see the Baku 2015 Flame leave the Maiden Tower for the final time, and follow the shore of the Caspian Sea towards Satko Pier before departing for the Olympic Stadium, where it will next appear on June 12 during the Opening Ceremony.

Azad Rahimov, Azerbaijan's minister of youth and sport, and the chief executive officer of Baku 2015, said the Journey of the Flame has brought the spirit of Baku 2015 into the hearts of Azerbaijanis throughout the country.

"It has built anticipation and excitement ahead of this defining moment for Azerbaijan and will now involve the Baku public in the magic of the first European Games," he added. 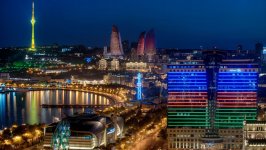