A photo exhibition "Karabakh issue: Where from and where to go" held Monday in Ankara, co-organized by the Association of Eurasian cooperation of civil society and the Association of Eurasian Economic Cooperation, supported by the Council of State Support to NGOs under the Auspices of the President of Azerbaijan in the framework of financing of foreign NGOs' projects.

The chair of the Council, MP Azay Guliyev held a speech at the conference. He said that the organization he represents aims at promoting Azerbaijan's national interests on the world arena and strengthening of cooperation with civil society.

He noted, that 25 years has passed since the beginning of the Armenian- Azerbaijani Nagorno-Karabakh conflict, and despite the fact that thousands of books and articles has been written on the subject, and that numerous internet pages has been created concerning the issue, there is still a need of spreading of objective information about the origin of the conflict.

Azay Guliyev stated, that the Armenian side is trying to create a false picture of the situation, when it says that the conflict concerns only the Armenian citizens of Azerbaijan, which is refuted by the existence of certain documents.

"We need to develop a "roadmap" for resolving the Nagorno-Karabakh conflict and achieve recognition of Khojaly genocide by the parliaments of countries, we must tell the world the truth about the so-called Armenian genocide, as well as to cooperate with Turkey to prevent Armenia plans for 2015," - Guliyev said.

The Turkish head of the Turkey-Azerbaijan Parliamentary Friendship Group Necdet Unuvar, headmaster of Turksih Giresun University Aygun Attar, Azerbaijani MP Rashad Dogru, Azerbaijani ambassador to Turkey Faik Bagirov, the head of the Turkish delegation at the Parliamentary Assembly of the Black Sea Economic Cooperation Organization (BSEC) Ismail Safi and other addressed the conference. They stressed the need of joining forces of fraternal peoples to liberate Nagorno-Karabakh. 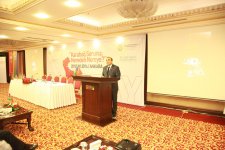