Azerbaijani official: Country to prevent use of state funds for certain political forces in elections (PHOTO) The Azerbaijani government will not allow public resources to be used for certain political forces in the elections, Azerbaijani Presidential Administration Socio-Political Department head Ali Hasanov said at an international conference on the upcoming parliamentary elections in Azerbaijan.

"The country has created all the necessary conditions for holding democratic elections. Everyone has the right to elect and be elected," Hasanov said. "One of the achievements is that over the intervening period, the Electoral Code was brought into line with European standards. Azerbaijan has a judicial system meeting European standards."

Opposition parties want to improve legislation as a means of ensuring transparent and democratic elections.

Azerbaijan will hold the parliamentary elections in the fall. The previous elections were held in November 2005. The elections use the majority system in Azerbaijan's 125 constituencies. 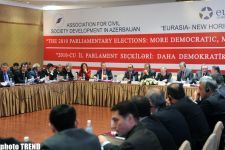 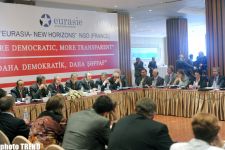 Our response was harsh, but Armenia deserved it - President Ilham Aliyev