During his speech at the meeting in the Mississippi Senate held within the visit Azerbaijani MP Asim Mollazadeh stressed Azerbaijan is one of the U.S. allies in the region and noted importance of further development of bilateral relations.

Senator John Horn noted important role of Azerbaijani-U.S. relations and expressed confidence that bilateral relations between Azerbaijan and the State of Mississippi will give new impetus to further expansion of these ties.

After the hearings, the Mississippi Senate adopted a resolution under the number 561, supporting the bilateral relations between Azerbaijan and the United States.

During his speech in the House of Representatives Mr Mollazade in connection with the military aggression of Armenia against Azerbaijan, said that these days Azerbaijan commemorates the victims of the Khojaly tragedy, which occurred 20 years ago.

The Mississippi House of Representatives adopted a resolution number 38 related to Azerbaijan.

During the visit, with the participation of the U.S. government officials, secretary of state, senators and members of the House of Representatives of State of Mississippi an Azerbaijan-Turkey and Mississippi business summit was held.

Congressman Greg Harper and Secretary of State Delbert Hosemann spoke at the summit and, noted that they hail the development of relations between Azerbaijan, Turkey and the United States.

Vice-president of SOCAR Khali Mammadov said along with the fact that Azerbaijan is an important exporter of oil it has become a reliable exporter of gas in recent years. 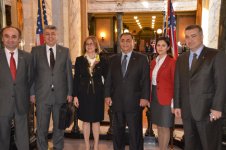