According to him, the polling stations have already fully started their activities.

"Voting has started in all polling stations. 48 political parties of Georgia and two political blocs are taking part in the elections. Elections are held both by proportional and majoritarian systems. The Azerbaijani delegation, as well as the deputies represented in the GUAM Parliamentary Assembly as observers, have already visited Members of the Azerbaijani delegation also visited two polling stations in Cheravani, Mtskheta region, where most refugees live. About 1,200-1,300 voters are registered in each of these precincts. According to information by 11:00, about 10 percent of these voters polling stations have already voted," Nagiyev said.

He added that at the moment no incidents have been recorded and the electoral process continues normally. 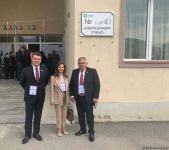