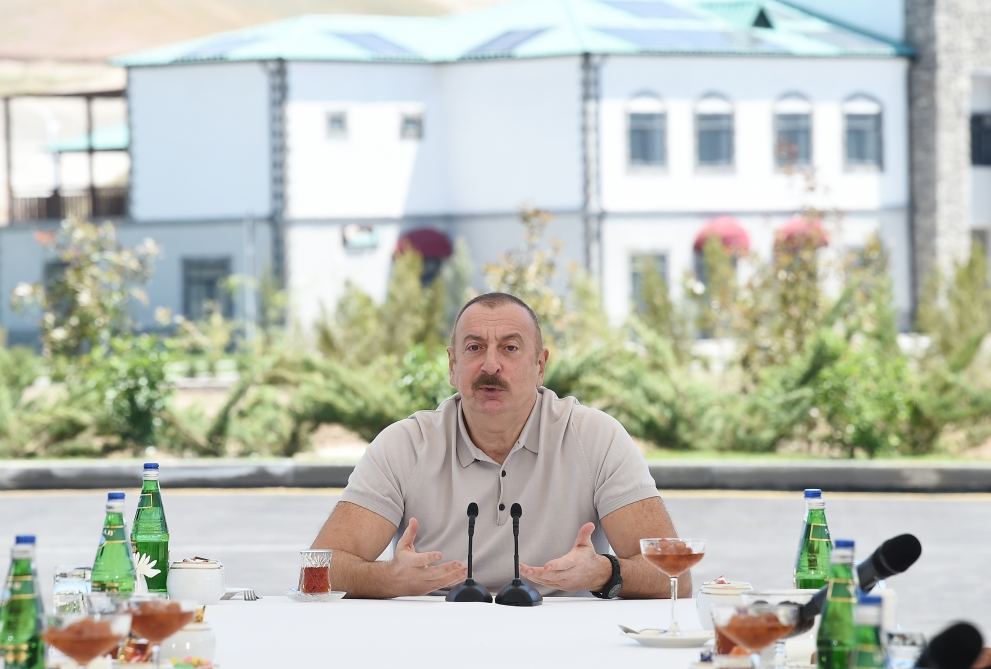 BAKU, Azerbaijan, May 27. Political and economic independence has allowed us the opportunity to build our lives the way we want, President of Azerbaijan Ilham Aliyev said during the meeting with the Aghali village residents, Trend reports.

"We have done a lot to strengthen our independence. We are fully independent politically. No country can influence our will, and everyone already knows that Azerbaijan must be reckoned with. Azerbaijan's position must be taken into account. Azerbaijan is a self-respecting state and demands and receives this respect from everyone.

We are economically independent. Today, the number of economically independent countries is not so high. Recent history has shown this. But we are completely independent, we do not depend on anyone, we are building our own lives and do not need any help or credits. On the contrary, we are lending money to some countries. As a result of economic independence, I can say that this village of Aghali has become one of the most progressive villages in the world now. We have done this, we are carrying out restoration work on our own. We are doing that in all other liberated lands on our own. Huge projects are being implemented now. The people of Azerbaijan are regularly informed about this.

Political and economic independence has allowed us the opportunity to build our lives the way we want, to build a state based on the ancient traditions and values of the Azerbaijani people, and to live comfortably in this state. The processes taking place in the world today are before our eyes of course. Azerbaijan is a land of stability and security. I can say that it is an island of stability and security. The whole world already sees and knows this. Of course, if we were not independent, i.e. if we were not truly independent, we would not be able to end the Armenian occupation. Because there were the factors that had led to this occupation, of course, external factors. Armenia itself cannot be considered a military, political or economic power, not even a medium-level state. The situation in Armenia is obvious. Of course, we must take into account these external factors. But at the same time, they could not have stopped us. From the first days to the last days of the war, I said that no-one and nothing could stop us. But the Armenian leadership had to give us a timetable of when our lands would be vacated, and then we are ready to stop the war, and we have kept our word. Therefore, if we did not pursue an independent policy, it is possible that these external factors, the foreign patrons of Armenia, and some of them threatened us, could deter us from this. But they did not. Because we have shown a strong will, our people united, and this is, of course, based on solidarity, national pride, dignity and power," the head of state said.