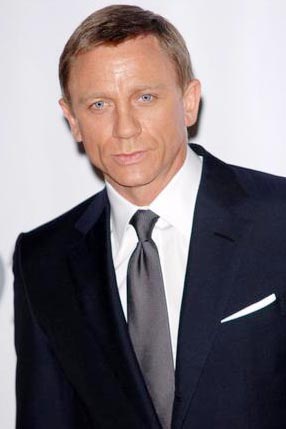 (people.monstersandcritics.com) - Daniel Craig is the British actor gay men most want to go on a date with.

The James Bond star topped the poll of single homosexual guys, conducted by dating website www.gay-PARSHIP.co.uk, after receiving 31 per cent of the vote.

Daniel - who starred as Francis Bacon's gay lover George Dyer in 1998 film 'Love Is the Devil: Study for a Portrait of Francis Bacon' - was followed by 'Atonement' star James McAvoy, who came second with 18 per cent of the vote, and Colin Farrell, who finished third.

Jude Law and Ewan McGregor rounded off the top five.

Keira Knightley - who has a lesbian love scene with Sienna Miller in upcoming 'The Edge of Love' - topped the female fantasy list with 35 per cent of gay single women naming her as their dream date.

Daniel recently revealed he asked Bond bosses to let him film a gay love scene in new 007 adventure, 'Quantum of Solace', saying: "Why shouldn't we have a gay scene? I think, in this day and age, fans would accept it."