A plenary session has kicked off at the Baku Convention Center as part of the 43rd session of the UNESCO World Heritage Committee, Trend reports.

At the meeting, the agenda was announced and the reports were heard from representatives of the participating countries.

Chairman of the session’s organizing committee, Azerbaijani Minister of Culture Abulfas Garayev welcomed the guests and informed that the event, which brings together more than 2,500 delegates from 180 countries, is an indicator of Azerbaijan’s prestige in the international arena, and it provides an opportunity to show the world a rich history and culture, as well as the level of modern development of Azerbaijan.

“All the guests have already familiarized themselves with the cultural heritage of Azerbaijan, and the magnificent opening ceremony has created a broad image of our country,” the minister said.

Director of the UNESCO World Heritage Center Mechtild Rossler said, noting the importance of the event, that she had witnessed interesting discussions of specialists at the forums of monuments managers and young professionals organized during the session.

She also said that the session in Baku attracted many experts.

“In the few days that we are here, we have witnessed the results of high-level organizational work,” she added. “All discussions during the session are broadcast in real time on the committee’s website. Also, in accordance with suggestions of the bureau members, the session agenda can be amended.”

Further, the meeting continued according to the agenda. Proposals on natural facilities will be considered first, then the cultural ones. During the session, parallel holding of 50 events and exhibitions is planned, and at the same time the current state of 166 monuments under threat will be examined. 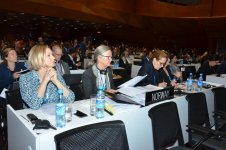