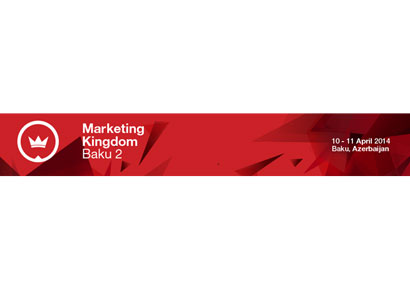 P World, Azerbaijan's leading event agency, has just announced that the second edition of the Marketing Kingdom Baku, Azerbaijan's biggest marketing event, will take place on the 10th and 11th of April 2014 in Baku.

"For the 2014 edition, we will bring to Azerbaijan some of the world's biggest marketing and communications experts. Delegates attending will be able to hear some of the greatest marketing stories in the world such as: how does it feel to work with Beyonce, what does it mean to manage the press campaign for William and Kate's wedding or how do big corporations such as Microsoft, Jumeirah Group, Tate Museum and HP create their global marketing strategies" said Kosta Petrov, Global Managing Director of P World, best-selling author and TV producer.

Nar Mobile is supporting the event as Platinum Sponsor, PASHA Bank as Gold sponsor and HRC (The HR Company) as Exclusive HR Partner.

The two-day marketing extravaganza starts with a presentation on the importance of partnerships in marketing by Sebastian Micozzi, Head of Marketing at PepsiCo. During the two days event regional marketers will also hear presentations on content planning by Tate Museum in the UK, portfolio marketing by HP, experiential marketing by Microsoft and reputation management by Colleen Harris, the former Press Secretary to Prince Charles and the Princes William and Harry.

The Marketing Kingdom Baku 2 also includes an exclusive presentation on image building by Mary Jo Jacobi, the only person in the world that has worked for two US Presidents, the British Queen and the UK Prime Minister. Most recently she managed the crisis communications for BP in the Gulf of Mexico.