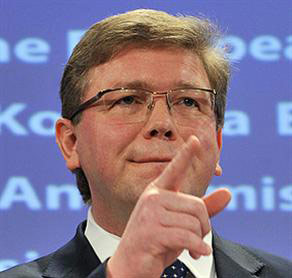 European Commissioner Štefan Füle during the meeting with President of the Armenian National Assembly Hovik Abrahamyan on Wednesday stressed the need for Azerbaijan and Armenia to seek a diplomatic solution to issue relating to the airport in Khojaly.

According to the press statement by Commissioner Füle, posted on the European Commission website, issues concerning the Nagorno-Karabakh settlement process, including the issue of possible flights to the airport in Azerbaijan's occupied territories were discussed.

Commissioner Füle reiterated EU's continued support for the OSCE Minsk Group co-chairs and their efforts in facilitating a peaceful settlement.

"He also stressed the need for the sides to seek a diplomatic solution to issues relating to this airport and to avoid any actions that could fuel tensions in the region," the statement said.

Earlier, Armenian media reported about the commissioning of the airport in Khojaly.

The action towards the commissioning of the Khojaly irport in Nagorno-Karabakh is dangerous. It violates international law and harms the peaceful settlement of the conflict.

Previously, the Azerbaijani Foreign Ministry urged all international companies operating in Khojaly irport to immediately stop their illegal activities in the occupied territories of Azerbaijan.

Commissioning the airport in Khojaly s an open violation of the Convention on International Civil Aviation.

He said Armenia's steps directed towards the operation of the airport in Khojaly are attempts to violate international legal norms. This air space belongs to Azerbaijan, so its use by Armenia is impossible.