The 20th anniversary of the Khojaly genocide was marked by protest march in the Ukrainian city of Odessa.

Representatives of the Ukrainian, Moldavian, Jewish, Turkish and Tatar youth took part in a protest march, organized jointly by the Association of the Azerbaijani Youth of Ukraine and the Youth Forum of the Organization of Islamic Cooperation, the Association told Trend on Tuesday.

"Activists of the association, who organized protest march in the central streets and squares of Odessa under the slogan "The Armenians have to answer to history for the atrocities committed in Khojaly", members of youth organizations of Turkish, Tatar, Jewish, Ukrainian and other nationalities distributed among the local population booklets with information on the atrocities committed by the Armenians in Khojaly.

Despite the frosty weather, the youth fell to the ground, forming the number "613" - such number of people became victims of the Khojaly genocide. Then 613 black balloons were released to the air, on which words "Justice for Khojaly" were written, which was a call for justice, addressed to the world community and international organizations.

Then, with the participation of the Diaspora representatives of number of people living in the Odessa district, local and foreign students a ceremony of remembrance of victims of Khojaly genocide was held. Speaking at the remembrance ceremony the President of the Association Anar Tahirov and chairman of the Association's Odessa organization Samir Aliyev brought the facts of numerous crimes, genocide, ethnic cleansing and aggression of Armenia against Azerbaijan, stressing that they can be traced over the past two centuries.

The event participants watched a documentary on Khojaly genocide, telling about the atrocities the Armenians committed against children, women and elderly people in frosty February night.

After watching the film Consul General of Turkey in Odessa Argan Hussein said "Official Yerevan and the current leadership of Armenia directly involved in the Khojaly genocide must be held before an international court".

Chairman of the All-Ukrainian Youth Organization Anton Daritchenko, Chairman of the Moldovan youth organization Andrew Tetyu and others who spoke called the historical injustice that after 20 years the international community has not given the legal and political assessment of this tragedy.

At the end of the event for the legal and political assessment of the genocide committed by Armenians against Azerbaijanis in Khojaly, an appeal to the Parliament of Ukraine and international organizations was adopted. 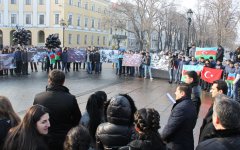 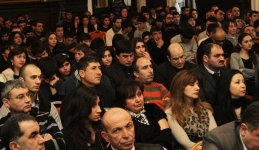