President of the Republic of Azerbaijan Ilham Aliyev has attended a ceremony marking the completion of a project to reconstruct water supply system of the city of Ujar.

President of AzerSu Open Joint Stock Company Gorkhmaz Huseynov informed the head of state that measures aimed at improving the supply of drinking water to rural population are being continued as part of the State Program on the socioeconomic development of districts.

The project is aimed at improving water and sewerage system for 22,000 residents of Ujar. Overall, the project will benefit 59,000 people. As part of the project, a new administrative building was built for Ujar Sukanal Department. The building has a state-of-the-art laboratory.

President Ilham Aliyev reviewed the conditions created at the building, which covers a total area of 720 square meters.

A SCADA control center was created here. One of the highlights of the center is a Geographic Information System, which was introduced in the city of Ujar to enable management of the entire network infrastructure by digital maps based on geographic data. This system won two prestigious international competitions.

The project to reconstruct water supply and sewage system of Ujar was financed from the state budget. According to the project, Kulullu water reservoir of the Girdimanchay river was chosen as a source of continuous drinking water supply to the city of Ujar and surrounding villages. 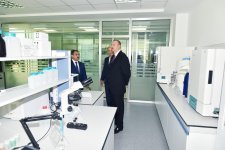