The dynamic partnership between Estonia and Azerbaijan will develop in the future in all areas, said Estonian President Toomas Hendrik Ilves at a meeting with Azerbaijan's new ambassador in Tallinn, Murad Najafbayli.

Stressing that Azerbaijan is a friendly country, Estonian president expressed satisfaction with the level of bilateral cooperation, saying he is confident that this cooperation will further develop in all the areas, Azerbaijan's Embassy to Estonia told Trend Jan. 29

Azerbaijani ambassador further presented his credentials to the president of Estonia.

The ceremony for presentation of the credentials took place at the Kadriorg Palace. During a meeting held after the official ceremony, the ambassador conveyed sincere greetings and best wishes of Azerbaijan's President Ilham Aliyev to his Estonian counterpart.

The diplomat further pointed to the high level of relations between Azerbaijan and Estonia, and said he will make efforts to further strengthen and develop this cooperation.

During the meeting, the sides also exchanged views on the current state and prospects of development of relations between Azerbaijan and Estonia, and the cooperation between the two countries at both bilateral and multilateral levels within international organizations.

Azerbaijani ambassador also informed the president of Estonia on social and political, social and economic situation, as well as Azerbaijan's success achieved under the leadership of President Ilham Aliyev.

The diplomat further informed President Toomas Hendrik Ilves about the Armenian-Azerbaijani Nagorno-Karabakh conflict, the continuation of aggression from Armenia, occupation of 20 percent of Azerbaijani territories, and Armenia's acting as if it is engaged in talks on a peaceful settlement of the conflict.

The ambassador also stressed Azerbaijan's interest in further developing and strengthening relations with the friendly Estonia in all fields.

The Estonian president, in turn, wished success to the ambassador, and thanked him for the greetings conveyed by President Ilham Aliyev, and asked to convey his greetings and best wishes to the Azerbaijani president. 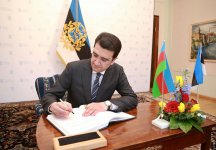