According to the message, the ambassador expressed gratitude for the support rendered during his diplomatic career.

Mammadyarov wished the ambassador success in his further activity. 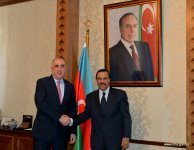