During the meeting, discussions were held on such issues as exercises for the national defense and security forces of Afghanistan, operational conditions and regional security of the Resolute Support Mission, being conducted under the leadership of NATO with the aim of support and consultation.

Moreover, the opinions and recommendations in connection with 2019 and the further period were heard. 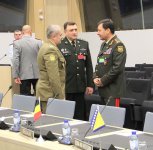