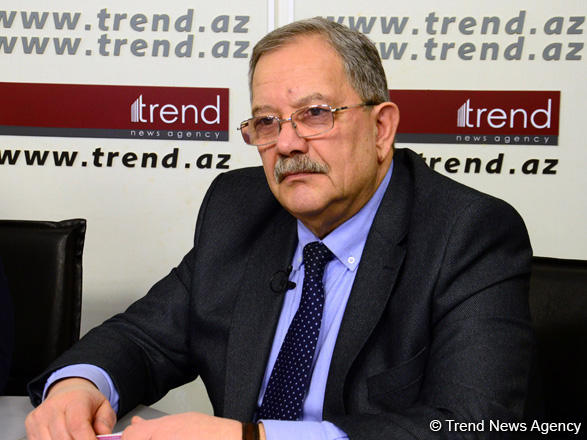 Armenia’s provocative statements in the UN, its use of procedural moments, attempts to change the structure and format of the negotiation process are different forms of the same policy, Head of the Expert Council of the Baku Network and Deputy Director General of Trend News Agency Elkhan Alasgarov said.

Alasgarov made the remarks in Baku, during the roundtable discussions in the press-center of Trend.

The issues covering the settlement of the Armenia-Azerbaijan Nagorno-Karabakh conflict, the role of international organizations, in particular the UN, the OSCE Minsk Group, which are directly related to the settlement of the long-term problem, were discussed during the roundtable discussions.

Alasgarov stressed that the only solution to the Nagorno-Karabakh conflict is to force Armenia to peace through substantive negotiations with Azerbaijan.

"Despite the negotiation process is being torpedoed by the Armenian side, we must work to create a solid legal base and promote our interests more actively,” he said. “I think that one of the effective steps towards the Nagorno-Karabakh conflict settlement could be the adoption of a new document on the South Caucasus with Georgia’s participation within the UN.”

“I think that the document must outline the resolutions on the Nagorno-Karabakh conflict settlement to give some impetus to the negotiation process," Alasgarov said.

The expert stressed that the UN has recently adopted a document on Central Asia to unite the regional countries.

"This is a single document and I think that it is necessary to adopt a similar document on the South Caucasus to resolve the Nagorno-Karabakh conflict,” Alasgarov said. “I think that the document may also have an impact on the co-chairs of the OSCE Minsk Group, to whom we have a lot of questions and who think that they have a monopoly on the conflict settlement process.”

During the roundtable discussions, the experts assessed the recent provocation of the Armenian side, in particular, the provocative report of the unrecognized "Nagorno-Karabakh Republic" which was posted on the UN website.

The experts also expressed the views on the degree of protection of the legal framework of the adopted documents from the Armenian side’s attacks and assaults and the reason of Armenia’s current intensification.