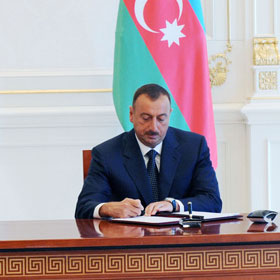 Azerbaijani President Ilham Aliyev signed a decree on application of amendments to the law "On 2010state budget of Azerbaijan ".

The Azerbaijani parliament adopted amendments to the 2010 state budget with 98 MPs voting "for" and five MPs voting "against' in June.

As a result of adjustments, the budget price on oil increased from $45 to $60 per barrel.