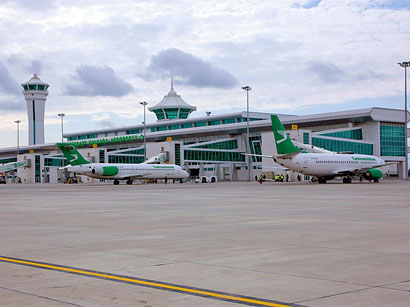 The number of foreign aircraft landing for technical reasons at the international airport of Turkmenbashi almost doubled during the last year, Neutral Turkmenistan newspaper wrote on Thursday.

According to a decision of the President of Turkmenistan, over a year ago world airlines were offered an opportunity to refuel at discounted prices.

'Thanks to this far-sighted policy, currency revenue from the service of transit flights increased by 6.5 times', the article says.

Turkmenbashi Airport was created according to highest standards. Its new 3500-metres long and 60-metres wide runway allows it to serve all types of aircraft.

Special equipment from SIEMENS and Thales provide continuous monitoring not only of scheduled airliners, but also of transit flight in the airspace of the coastal region. A centralised fuelling station can simultaneously fuel eight aircraft.

The Neutral Turkmenistan newspaper notes that a favourable geographical location at the crossroads of maritime, air, rail and automobile routes, linking Europe, Caucasus and Central Asia should play a positive role in the development of air transport in the intensively developing seaside region.

In order to realise this potential, it is planned to start Ashgabat-Moscow-Astrakhan-Ashgabat, Ashgabat-Istanbul and other international flights via Turkmenbashi in the near future.

This international airport was commissioned in 2010. The project worth 125 million euros was implemented by the Turkish multi-sectorial company Polimex, which won the tender.

The project was funded by Turkmenistan's state budget. The capacity of the facility is about six aircraft per hour and 8000 passengers. The airport receives aircraft with a take-off weight of about 400 tons.

First of all, the new terminal was built 'to optimize' the influx of foreign tourists in the Avaza resort area on the Caspian coast. This was declared a free economic zone being built as a tourist complex at a multi-billion dollar cost.

Turkmenistan authorities promise to introduce a facilitated visa regime. CIS citizens also need a visa, as well as Turkmenistan which left the agreement of CIS member state on a visa-free method a long time ago.