Turkmenistan is open for negotiations on accession to the International North-South Transport Corridor project, Turkmen Ambassador to Azerbaijan Mekan Ishanguliyev said at a briefing in Baku.

He said that Azerbaijan and Turkmenistan have the potential to unite Asia and Europe.

“Turkmenistan has all necessary infrastructure to join the International North-South Transport Corridor project, and the construction of the Turkmenbashi International Seaport is nearing completion,” the diplomat said.

He also noted the significance of the Lapis Lazuli transport project, the participants of which are Afghanistan, Turkey, Turkmenistan, Azerbaijan and Georgia.

The Lapis Lazuli Route agreement was signed in October last year between Afghanistan, Turkey, Turkmenistan, Azerbaijan and Georgia and once implemented will become a key international trade and transport corridor that will directly connect Afghanistan to Europe.

The Lapis Lazuli Route will start in Afghanistan’s northern Aqina port in Faryab province and Torghandi in western Herat province and will run through to Turkmenbashi in Turkmenistan.

From there it will cross the Caspian Sea and will link the Azerbaijani capital Baku to Tbilisi and Georgia’s Black Sea ports of Batumi and Poti.

It will then connect with Kars in eastern Turkey before linking to Istanbul and Europe. 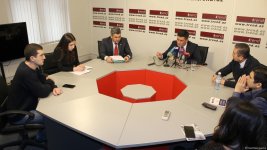