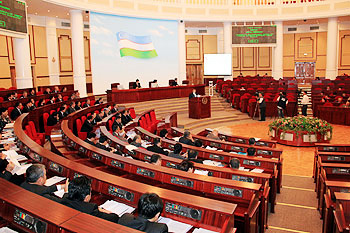 The elections held to the Legislative Chamber of Uzbek Oliy Majlis (the parliament's lower house) didn't fundamentally change the political spectrum in the new composition of the parliament.

It was earlier reported that as a result of the elections held on Dec.21, 2014, as well as the re-vote held in 22 constituencies on Jan.4, 2015, 52 MPs were elected from the Liberal Democratic Party declaring the protection of the interests of the middle class owners - entrepreneurs and farmers.

The party got 53 seats in the parliament as a result of the 2009 elections.

The number of MPs from Uzbekistan's Ecological Movement remains unchanged (15) in accordance with the electoral law. At the same time, as a result of these elections, the personal composition of Uzbek parliament was significantly renewed.

The country's Central Election Commission (CEC) said that only 40 MPs, or 27 percent of the total number of the elected MPs worked at the Legislative Chamber of the previous convocation.

It is expected that the leadership of the Legislative Chamber will be elected, the list of committees will be approved and the positions of their chairpersons will be distributed among the factions of political parties and Ecological Movement soon.

Moreover, the elections to Uzbek Senate (the parliament's upper house) will be held on Jan.13-14, after which both houses of the parliament will be fully formed.

However, analysts believe that the main intrigue in January is the upcoming nomination of candidates for the post of prime minister.

Under the Uzbek law, a candidate for prime minister is nominated by the political party which has gained the majority of seats and in this case, the Liberal Democratic Party got this right.

The interest in this event is first of all stems from the country's tasks to maintain the stable growth rate of the economy under the conditions of the ongoing world economic crisis, as well as its structural reformation and technical and technological renewal of the production sphere.