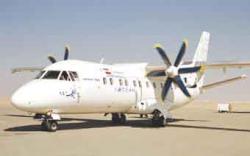 Habibi was reacting to a statement by Mohammad Ali Sirati, the managing director of Iran Airplane Manufacturing Company (HESA) who said despite the flying ban, the company continues manufacturing the plane.

Habibi emphasized that for the time being, HESA is not permitted to produce IrAn-140, Iran's official IRIB news agency reported May 19.

The Islamic Republic civil aviation organization has banned production and use of the IrAn-140 air craft as well as issuing fly licenses for the plane, Habibi said.

He further said that the ban will remain untill determining the cause of last year crash and removing the problems.

The Ukrainian Antonov aircraft which was assembled in Iran under the IrAn-140 name has experienced various crashes in recent years. The first fatal crash of IrAn-140 occurred during a test flight in 2009, killing the five crews.

The deadliest crash occurred in August 2014, shortly after plane's takeoff from Tehran Mehrabad International Airport. 40 people killed in the disaster.