Rouhani: No country should be allowed to spoil relations of Iran, Azerbaijan

Politics Materials 17 September 2014 15:25 (UTC +04:00)
No country should be allowed to spoil the close relations between Iran and Azerbaijan, No country should be allowed to spoil the close relations between Iran and Azerbaijan, Iranian President Hassan Rouhani said in Tehran Sept. 17.

He made the remarks at a meeting with Azerbaijan's Economy and Industry Minister Shahin Mustafayev, the Iranian news agency IRNA reported.

Rouhani stressed the importance of expanding political, economic and cultural relations between the two countries.

He went on to add that terrorism poses a serious danger for the region, and the region's countries must jointly combat this threat.

Iran's president also said the Caucasus has long suffered from a lack of stability.

He said the bilateral relations between the two countries have especially developed in recent months.

The minister also stressed that Azerbaijan stands ready to cooperate with Iran in the areas of water supply, electricity, transport, and trade. 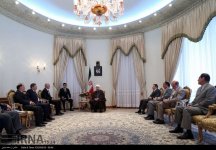