The Iranian parliament will discuss the issue of the Khojaly genocide, a member of the National Security and Foreign Policy Committee of Iranian Islamic Consultative Assembly (Parliament) Javad Jahangirzadeh said at a briefing in Baku on Thursday.

"It was agreed that the parliamentary friendship groups of the two countries would jointly prepare a letter and sent it to the Iranian parliament expressing its position on the issue of the Khojaly genocide. Iran had a lot of martyrs who have defended their state and independence. We share the woes of the Azerbaijani people and are pleased that the border between Iran and Azerbaijan are the boundaries of peace and security, "Jahangirzadeh said.

According to him, Iran approaches to the topic of the Nagorno-Karabakh conflict with sensitivity and considers it wrong to have any outside interference in solving regional conflicts.

On the night of February 26, 1992 Armenian armed forces together with the 366th infantry regiment of the former Soviet army stationed in Khankendi attacked Khojaly which was in a siege situation for many months and in one night the city was erased from the face of the earth. During this bloody event, a ruthless massacre was committed against civilians. Dead bodies were desecrated and 1275 people taken hostage while the fate of 150 remains unknown. Some 613 people were killed including 63 children, 106 women and 70 old men and eight families wiped out.

Regarding relations between the two countries, Jahangirzadeh also stressed the great potential for an expansion of ties.

"Historical and cultural ties between Iran and Azerbaijan can create ground for the development of cooperation in the tourism sector. Iran unilaterally abolished visa requirements for Azerbaijani citizens and we believe that Azerbaijan will also cancel the visa regime for Iranian citizens," he said.

According to Jahangirzadeh, Friendship Group of Azerbaijani parliamentarians will visit Iran in November. The purpose of the visit is to develop relations between the parliaments of the two countries. 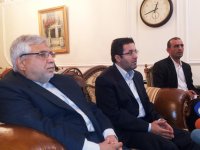