Representatives of the Azerbaijani Ministry of Culture specialized in cultural monuments and institutions, represented in the operational headquarters under the temporary commandant's office to fulfill the relevant tasks, began monitorings in the territories liberated from the occupation, the ministry told Trend.

During the monitoring, 56 cultural institutions were identified, including 25 libraries, 19 houses of culture and clubs, seven museums, and five children's music schools. Almost all of them are in a completely destroyed state.

It was found that 28 monuments were completely destroyed as a result of the Armenian occupation and only ruins remained of them.

Monitoring in the territories of Azerbaijan liberated from the occupation continues.

In order to implement the Decree of Azerbaijan’s President No. 1170 dated October 29, 2020 ‘On the organization of temporary special administration in the liberated territories of the Republic of Azerbaijan’, temporary commandant's offices have been set up in the liberated areas for each district, carrying out special management. Besides, operational headquarters under the offices were established, consisting of the representatives of state-owned bodies (structures), including the Ministry of Culture.

According to Article 7.8 of the decree, the temporary commandant's offices have been instructed to organize the initial inventory and protection of historical and cultural facilities (monuments and institutions) jointly with the ministry. 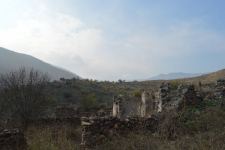