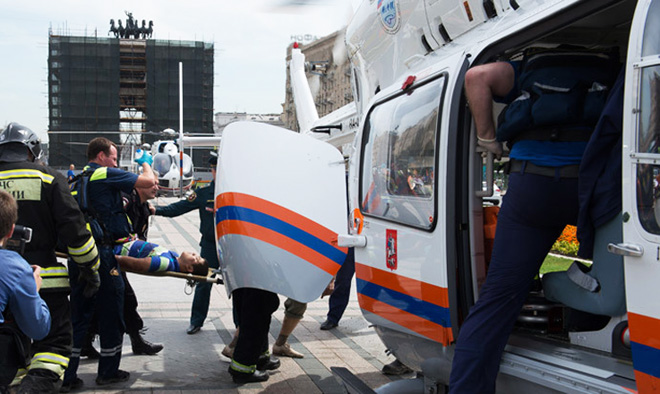 20 people have been killed and over 160 injured as several subway cars derailed on the Moscow Metro on the Arbatsko-Pokrovskaya dark blue Metro line on Tuesday morning, RT reported.

"Currently seven dead bodies have been passed to the investigators and are now in the entrance hall," said Aleksandr Gavrilov, deputy head of Moscow's Emergencies Service (Emercom).

"Those are four men and three women. There are six bodies remaining in the first carriage, and six more in the second one."

Moscow authorities have declared Wednesday a day of mourning for those who died in the accident.

One hundred and twenty-nine people have been taken to hospital by 110 ambulances, according to the deputy head of the Moscow government healthcare department, Aleksey Khripun.

"All of the injured have arrived to hospitals alive, but one severely injured woman died in 71st hospital," Khripun said, as cited by ITAR-TASS.

The driver of the derailed train, who was earlier reported dead, is actually alive and being treated in hospital, Moscow authorities say, according to RIA Novosti.

Investigators have been looking into all possible theories of how the accident could have occurred, ruling out a terrorist act, spokesman for the Russian Investigative Committee, Vladimir Markin said at a press conference.

"No signs of terrorist act are being seen. It's most likely a technological accident," Markin said.

The accident happened during the morning rush hour when the train was packed with passengers.

The first carriage of the train sustained most of the damage, according to an eyewitness of the accident who spoke to RT. Ivan, said he was in the second car when the train suddenly braked and the lights went off.

"I was tossed up in the air," the young man says. "There was blood on the floor, heads bruised, arms broken. Panic broke out."

Ivan also says after the train derailed there was a flash and then the tunnel was filled with thick smoke.

"The car was badly damaged. We started to get out. We saw a door in the tunnel's wall. Men eventually broke that door and we saw workers, constructing a parallel tunnel. They helped us to get out."

An eyewitness, who spoke to LifeNews, was in the fifth carriage and says they had to wait for 30 minutes before the evacuation started.

"So as we got out, we proceeded to march on foot, probably for two or three minutes - along the tunnel with cables underneath. The train driver had told us right away to stick to the right side, so we did. No sooner had we got to the surface than we realized it was a full-blown emergency."

Andrey Zenin, another survivor in the accident, says he helped extinguish the fire in one of the carriages and he also was among the volunteers who helped to get the injured out of the tunnel.

"There was a man next to me and his head had been smashed by the handrail and he was unconscious," Zenin told RT. "Some people had broken ribs and one person's arm was injured. All in all, people were hysterical."

Law enforcement officials told that three train cars had derailed, "but not overturned."

Prime Minister Dmitry Medvedev has expressed condolences to the families of the dead and promised that the federal government will help in the post-accident clean-up.

Moscow authorities do not consider the cause the accident in the Metro could have been a terrorist act, according to Maksim Liskutov, the head of the transport department in the Moscow government, cited by Dozhd TV channel.

Moscow Mayor Sergey Sobyanin has promised to take tough measures against those responsible for the accident after visiting the crash site.

"I'm sure a criminal case should be launched into the accident, an investigation conducted and the toughest measures taken," Sobyanin told journalists, after he visited a hospital where the injured had been taken.

Some passengers could still be at the site of the accident, according to Maksim Liskutov, Moscow's deputy mayor.

Attempts are being made to try and evacuate the stricken passengers, who are stuck in a tunnel between Park Pobedy and Slavyansky Bulvar stations, in the west of Moscow.

A failure in the power supply led to a false alarm going off. The alarm was a signal to the train driver to immediately stop the train. The sudden braking led to the derailment of several carriages.

Moscow emergencies agency 's press service says the train derailed because it had to brake too suddenly.

"At 8:39am Moscow time [04:39 GMT] on a stretch between stations of Park Pobedy [Victory Park] and Slavyansky Bulvar there was abrupt deceleration of a train," Moscow emergencies agency 's press service employee told RT.

Sixty-six buses, 40 ambulances and eight helicopters have been deployed by rescuers for evacuations.

The Investigative Committee (IC) has launched a criminal case over 'violation of transportation security demands', according to interim head of the Moscow's Western District Department of the IC, Roman Syomushkin.

The Moscow Metro, with its 194 stations and a route length of 325.4 km (202.2 miles) is one of the world's busiest, carrying up to 9 million passenger trips each workday.

The Arbatsko-Pokrovskaya, or dark blue line, where the accident happened, is the longest and possesses the deepest section in the Moscow Metro, at 74 meters (243ft) deep near the Park Pobedy station.

As of 2011, the blue line carried 733,000 people daily, but has since been extended westwards, with several new stations opening.