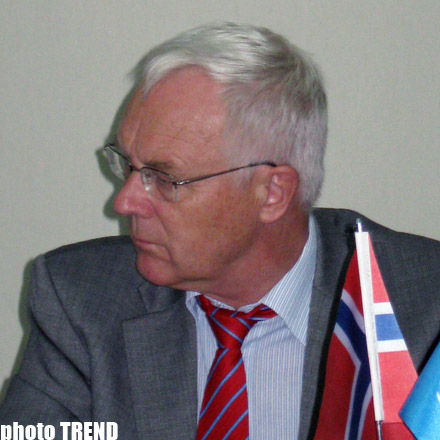 On July 19th Norwegian Ambassador Mr. Jon Ramberg and Resident Representative of the United Nations Development Programme Mr. Fikret Akcura will give a joint press conference on the occasion of the launch of UNDP-Norway: Working Together for the Development of Azerbaijan booklet.

The booklet summarizes results of lasting cooperation between the Government of Norway and UNDP in Azerbaijan's development in the above mentioned fields, that are important for Azerbaijan.

Ramberg stressed that Norway contributes to the development of UNDP projects not only financially, but by supporting reforms in Azerbaijan, coordinating activities between the authorities of Azerbaijan and the United Nations Development Programme.

Since 2002, UNDP and the Norwegian Government implemented nine projects worth $5.9 million in cooperation with several public institutions, which include the Ministry of Ecology and Natural Resources, Ministry of Industry and Energy, Ministry of Health, Civil Service Commission under the President of the Republic of Azerbaijan, as well as the State Committee for Family, Women and Children Affairs.

Ramberg also pointed out Norway's two main goals in the context of this cooperation:

- Strategic development and reforming. This direction is most clearly embodies the recent projects implemented together with the Civil Service Commission. This project, in case of successful implementation will significantly improve the method of recruitment to the Azerbaijani Ministry.

- Support to the authorities in assisting the most vulnerable groups of population. The ambassador called the cooperation with the International Bank as the most successful example in this direction, as due to this it was possible to improve the organization of blood transfusion and thus reducing HIV infection cases.

Ramberg called the Ministry of Ecology and Ministry of Energy as one of the main partners from Azerbaijan's public sector in the implementation of joint projects with UNDP.

"It is important that the UNDP program's potential is actively used by Azerbaijan's authorities at 80 percent. This is a clear signal of commitment of the Azerbaijani leadership to the development goals of society and the country as a whole," Ramberg said.

Fikret Akcura, new Resident Representative of the United Nations Development Programme also shared his thoughts on the done joint work.
Norway has always been in the index of the UN in the first place on the global human development, Akcura, who arrived in Baku only six weeks ago, said. He said UNDP's aim in Azerbaijan is to increase the level and development of staff.

Representatives of Azerbaijan's public institutions involved in the implementation of UNDP projects addressed with congratulations on the successfully conducted works.

Each of them told about the details of the implemented and planned projects.