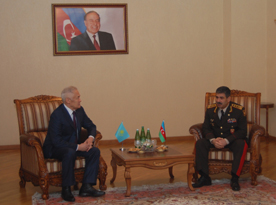 The sides discussed cooperation between the two countries in the military sphere, activity aimed at strengthening mutual trust and the contribution made by the countries in the sphere of regional security.

As for the military-political situation in the region, Hasanov stressed that the Armenian-Azerbaijani conflict is the main threat to stability in the region. He stressed the importance of its settlement in accordance with international law and UN Security Council's relevant resolutions.

The ambassador said that relations between the two countries are based on historical roots as well as good neighbourliness and brotherhood. As Kazakhstan and Azerbaijan have common positions in the economic, political and military spheres, they are also important partners on the Caspian Sea. Views on Azerbaijani- Kazakh military relations and other issues of mutual interest were exchanged.