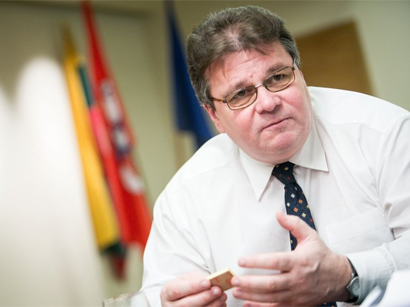 In his first day in Azerbaijan, October 21, Linkevicius will pay a visit to Baku.

The next two days Linkevicius will visit the city of Shamkir, as the chairman of the intergovernmental commission from the Lithuanian side. Here is scheduled the 4th meeting of the Azerbaijani-Lithuanian intergovernmental commission for October 22-23. The Parties will consider almost all aspects of bilateral cooperation, including trade, economic and humanitarian ties, Mammadzade said.

It is expected to sign an agreement on the formation of Shamkir and Siauliai as twin cities in the framework of the Commission.

This will be the first time that the Azerbaijani and Lithuanian cities become twin cities, the ambassador added. In this context, the composition of the Lithuanian delegation will include Mayor of Siauliai as well.

During October, the Minister of Transport and Communications of Lithuania Rimantas Sinkevicius (October15-16) and the delegation of the Ministry of Labour and Social Protection of Lithuania (October 29) will also visit Azerbaijan, Mammadzade said.

During the visit, which will take place October 29, the issues of the Azerbaijani-Lithuanian cooperation in youth policy will be considered. In Lithuania, the sphere of youth policy is in the supervision of the Ministry of Labor and Social Protection.

Azerbaijan to establish cooperation with Lithuania within TRACECA
Business 4 December 2019 21:50

Azerbaijan to establish cooperation with Lithuania within TRACECA
Business 19 November 2019 19:56