President of the Republic of Azerbaijan Ilham Aliyev and his spouse Mehriban Aliyeva have today viewed construction, repair and renovation works of the houses in Tartar district that were damaged this April when the Armenian military units shelled residential settlements located in the vicinity of the line of contact of troops in Tartar and Aghdam districts, killing, wounding civilians and damaging homes.

The head of state and his spouse viewed the renovated houses.

In May, President Ilham Aliyev signed an Order, allocating three million manats from the Presidential Contingency Fund to Tartar City Executive Authority for the renovation of the houses damaged by the Armenian shelling.

President Ilham Aliyev and his spouse were informed that four houses were rebuilt and eight ones were renovated in the district.

President Ilham Aliyev and his spouse viewed the repaired houses, spoke with residents, and posed for photographs with them. 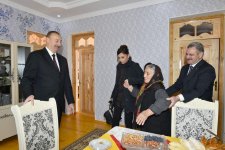