President of the Republic of Azerbaijan Ilham Aliyev has today received Minister of Foreign Affairs and International Cooperation of Morocco Nasser Bourita.

Moroccan Minister of Foreign Affairs and International Cooperation Nasser Bourita extended best wishes of His Majesty King Mohammed VI both to the President of the Republic of Azerbaijan and the country.

“The king of Morocco, His Majesty Mohammed VI highly appreciates his very good personal relations with you and the successfully developing ties between our two countries,” the minister said.

Minister Bourita noted that ahead of the anniversary of establishment of diplomatic relations between the two countries, the Moroccan side is also preparing for the events to mark the 25th anniversary of the historic meeting between the late King of Morocco and the national leader of Azerbaijan, Heydar Aliyev, which was held in Casablanca.

The minister described the historic meeting as a basis for building very good relations between the two countries, saying President Ilham Aliyev and the Moroccan King successfully continue this path.

He noted that the meeting of the joint commission, to be held as part of his visit, creates a good opportunity to discuss prospects for bilateral relations.

Pointing to the growing Islamophobia and radicalism across the world, the minister underlined the importance of the two countries’ strengthening efforts to preserve the Islamic values globally.

President Ilham Aliyev noted that the bilateral relations between the two countries are successfully developing on solid grounds, saying the foundation of these relations was laid by national leader Heydar Aliyev and the late King of Morocco.

The head of state said that the two countries demonstrate mutual solidarity in international organizations, including the UN and the Organization of Islamic Cooperation (OIC), and emphasized the importance of mutual support for the two countries’ territorial integrity.

President Ilham Aliyev pointed to Azerbaijan’s contribution to the Islamic solidarity, underlining the existence of multiculturalism and religious tolerance in Azerbaijan.

The president underlined the importance of presentations on the preservation of Islamic culture held by Azerbaijan in Europe, as well as ISESCO’s electing Nakhchivan as the Islamic Culture Capital for this year and Baku a few years ago.

“Today, Azerbaijan is actively fighting against the wide-spread Islamophobia across the world, and our countries demonstrate the same position on the international scene in this regard,” President Aliyev said.

Pointing to the economic ties, the head of state hailed the great potential for expanding bilateral cooperation in this area.

He underlined the significance of increasing mutual trade and exploring investment opportunities to this end.

President Aliyev thanked for the greetings of His Majesty King Mohammed VI and asked the minister to extend his greetings to the Moroccan King. 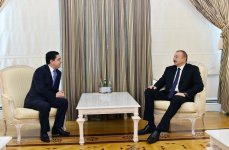