According to the plan of the exercise, the reactive artillery battalions, withdrawn to the reserve firing positions, are preparing to fulfill the tasks of providing practical fire support to the troops going on the offensive and launching fire strikes at the targets of the imaginary enemy.

The exercises involved up to 10,000 military personnel, up to 500 tanks and other armored vehicles, up to 300 missiles and artillery systems of different caliber, multiple launch rocket systems, and mortars, up to 20 army and front-line aviation for various purposes.

The exercises will last until March 15. 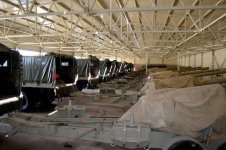