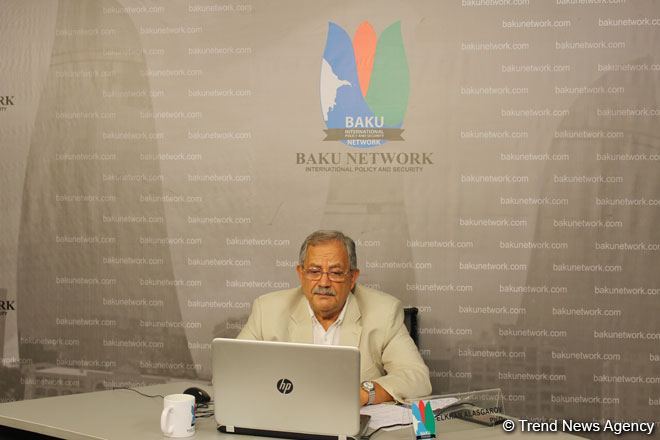 Restoration of Albanian Church and the rights of the Udi people is Azerbaijan’s another contribution to the development of the world civilization, Director of the Baku Network Expert Council, Ph.D. Elkhan Alasgarov said.

Alasgarov made the remark at the video conference entitled "Heritage of Caucasian Albania", held on the initiative of the Baku Network expert platform, Trend reports.

“A big expedition of the Azerbaijan National Academy of Sciences arrived in Kish village in Sheki district ten years ago upon the instructions of the Azerbaijani government,” Alasgarov added. “The work on the restoration of the ancient Christian church was launched.”

Alasgarov added that during a tough period, Azerbaijan took on a big responsibility, which also has historical significance.

“Azerbaijan, a country predominantly inhabited by the Muslim population, restored the violated rights of small, but one of the most ancient peoples of the Caucasus, the Udins and other peoples of the Christian faith who inhabited the historical Caucasian Albania, restored and opened a church,” Alasgarov said.

“I think that this is an unprecedented case in the world history when a country that is busy with the issues of occupation of 20 percent of its own territory, that is dealing with a million of its refugees, at the same time helps small, but native for Azerbaijan, Udi-Albanian community," he said.

"The issue is the heritage of all those people who inhabited Azerbaijan during the Christian period, rather than one nation,” director of the Baku Network’s Expert Council said. “Azerbaijan has preserved this heritage in the small Udi community.”

“I think that this is an example for so many countries that have tried in every way to assimilate this community,” Alasgarov added. “It should be noted that Armenia, which occupied our territories, presents the Albanian church as the Armenian church.”

“Azerbaijan makes an invaluable contribution to the preservation of the historical heritage of world civilization, restoring ancient Christian churches, while Armenia, which claims the title of an ancient Christian country, shamelessly presents the Albanian churches as its own and everywhere barbarously destroys the Muslim shrines,” Alasgarov said.

He added that Azerbaijan and the people inhabiting it are the descendants of Caucasian Albania and subsequent state formations on its territory.